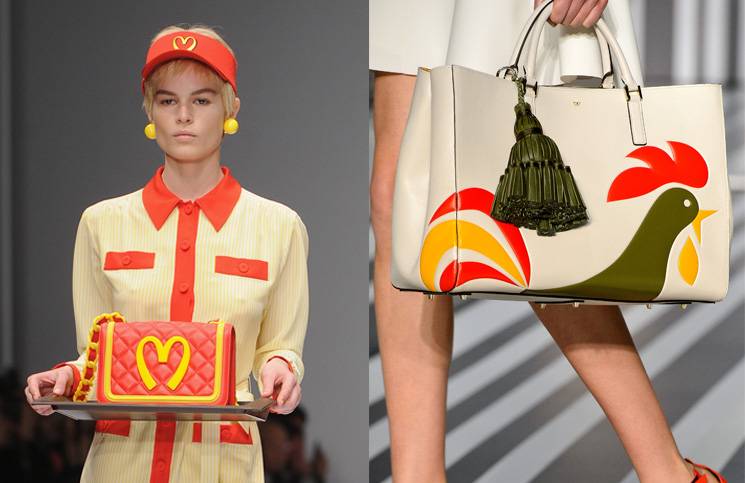 A model at Moschino and an Anya Hindmarch bag.

Fashion and food haven’t always had the best relationship, but the pair have been a force to reckon with during northern hemisphere’s fashion month – and we’re not talking about the tiny hors d’oeuvres served after the shows.

Kellogg’s, Hershey’s and even McDonald’s have served as inspiration at Moschino and Anya Hindmarch, in statements that reaffirm fashion is not only about what we throw on in the morning.

On the last day of London Fashion Week, accessories designer Hindmarch perked everyone up with whimsical totes emblazoned with the likes of Tony the Tiger and the Kellogg’s rooster. Models pushed shopping trolleys down a catwalk decorated as a giant bar code. At Jeremy Scott’s debut at Moschino, the models were decked out in an all-too-familiar yellow and red colour scheme, stamped with golden arches and carrying fast-food trays.

If that wasn’t enough of a nod to fast consumer items, there were also cocktail dresses and evening gowns seemingly made from junk food wrappers – tying it all up with a gown made from a nutritional information sheet for the last look.