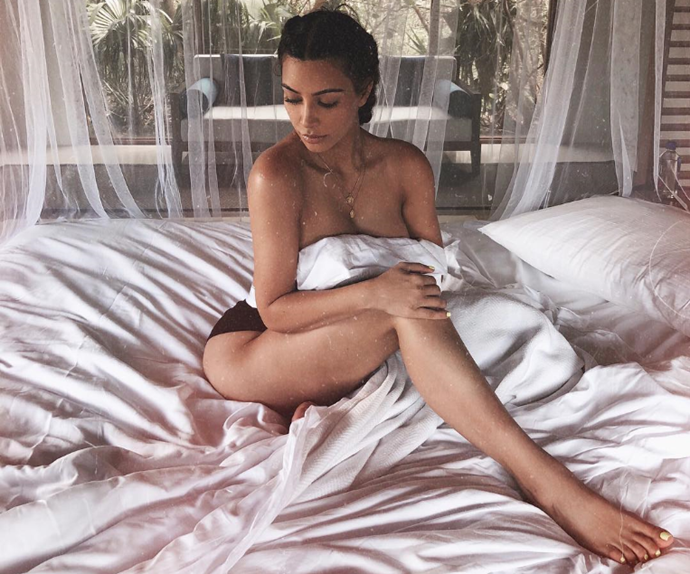 Although the star is known for posting revealing photos online, this time she’s taken it to a new level.

With her husband Kanye West off spilling his soul on Twitter and causing more controversy by proclaiming his love for Donald Trump, Kim Kardashian West has a new fragrance on the way. And what better way to celebrate the imminent launch of KKW Body (and divert attention away from a potential PR storm of your husband’s making) than to post a series of cleverly cropped nude images to Instagram.

The first, which was posted on Tuesday, was of Kim’s torso with one arm held across her chest to cover her nipples (and avoid the drama of Instagram’s no-nip rule). “KKW BODY 4.30 by Vanessa Beecroft #KKWFRAGRANCE,” Kim wrote in the caption.

It wasn’t until the following day that we were given a little more information about why Kim had posted this specific picture and what to expect from the product. In another naked (ish) post, Kim shared a picture of herself covered in a clay-like substance and explained: “We took a mold of my body and made it a perfume bottle.” Because, of course she did.

From what we’ve seen on Kim’s Instagram stories and the KKW Fragrance account, the perfume bottle is pretty similar to the iconic silhouette of the Jean Paul Gaultier bottles, with it’s shape reflective of Kim’s own neck-to-thigh proportion.

We took a mold of my body and made it a perfume bottle. @kkwfragrance

Beyond the surprise Instagram nudity, though, we have also been told what to expect from the fragrance itself. Kim shared a full rundown of the notes used in the perfume and if you’re any good at deciphering what it’ll actually smell like, you might take a guess at something pretty rich and complex.

Don’t worry if you’re confused by what these all mean, because there isn’t that long to wait before you can smell it for yourself. KKW Body launches 30 April 2018, so expect some social media fanfare as people get a hold of it for themselves over the next few days…