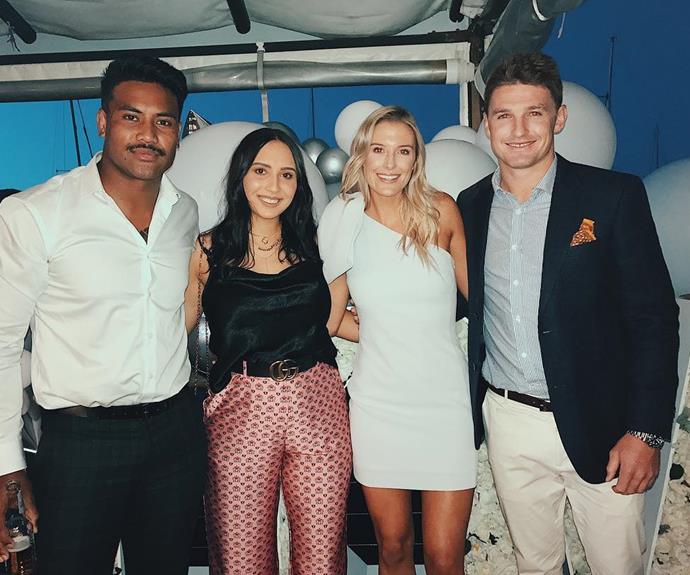 All Black halfback Beauden Barrett went all out when he proposed to his long-time love (and one of Miss FQ’s faves) Hannah Laity while on holiday in Fiji in January. And if their engagement party is anything to go by, their wedding is going to be one hell of an event!

The loved-up pair threw a belated party over the weekend for their closest family and friends – and they pulled out all the stops.

Auckland-based party stylist Vanessa Goodson, founder of OMG-Ness Styling, was flown down to the capital to style the event.

Goodson specialises in balloon installations, and her work took pride of place inside the venue. It’s not the first time she has worked for All Black alum; she styled the baby shower of Fatima Savea, wife of Beauden’s All Blacks teammate Julian Savea. The new parents, who welcomed baby Jude in December, managed a night out sans baby to join their friends for the celebration.

Julian and Fatima weren’t the only new parents in attendance – radio stars Sharyn and Bryce Casey also left their adorable wee bub Tyson at home so they could celebrate in style on the waterfront.

Barrett’s All Blacks teammate TJ Perenara was also there with his girlfriend Greer Samuel.

Laity described the party as “the best night ever with all the best people”.

The newly-engaged couple celebrated with not one but four individually designed cakes and limited edition Moet & Chandon champagne.

Along with the balloon installations, there was a flower wall and a ‘love’ sign adorned with more flowers. Guests entertained themselves at a custom selfie station where images could be taken and loaded straight to social media.

Barrett isn’t the only newly engaged All Black. Ardie Savea popped the question to his childhood sweetheart Saskia in December following the birth of their first child Kobe. A healthy day in the life of Hannah Laity